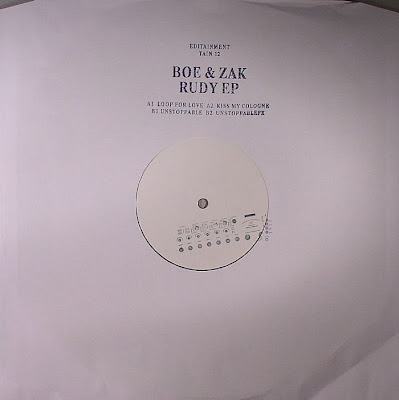 Tiger & Woods continental Europe disco tilted label Editainment's have built a roster of artists that are somewhat shrouded in a veil of mystery and ampersands; with names such as Cleo & Patra, Det & Ari, and Pop & Eye, it's pretty much a sure bet to say that their office is a hub of name innovation and laughter. Their latest artist to get a release on the label goes by the name 'Boe & Zak', who explore avenues slightly more removed from disco and associated with the classic side of house with tracks such as Loop For Love and Unstoppable comparable to the sounds of Kenny Dixon Jr. Whereas Kiss My Cologne takes a more direct and driven approach stripping back the instrumentation and almost sounding as if an overly keen kid is just finding out what each effect does (in a good 5 year old Beethoven with some decks-kind of thing). Released on the 18th March, you can get your hands on it here.